Disappearing and Re-emerging During the Pandemic

You would think that the pandemic, this time of pause, introspection, pulling inward, would result in more blog posts by me. I am honestly surprised by the complete halt to my blogging during this time.

Certainly, there was no halt at all to my introspection. My self-care routine after the initial shut-down in March of 2020 included journaling both morning and evening, reading and writing poetry every day, plus yoga, daily walks, and reading texts of a spiritual and thought-provoking nature (Martin Buber and Parker Palmer were two of my favorites). My morning routine seemed to grow and expand with each passing day. I suppose it's no surprise I needed to up the ante on my self-care. As a teacher, there was a special brand of grief and loss to the shut-down and the shift to online learning. As the spouse of someone at high-risk, I interacted daily with a high level of anxiety.

Perhaps the very nature of the pandemic shut-down demanded so much drawing inward that there was nothing left for me to put out into the world. Now, as I engage in my annual ritual of re-reading my journals from the past year, I am acutely conscious of the perspective shift I have undergone. I knew I was experiencing this shift - knew it intellectually - but now I see how deep it went. And I am grateful. But those bone-deep changes require, and stem from, intensive inward pulling.

I've been a bit sick of hearing about the "gifts" of the pandemic shut-down. Perhaps I felt there was no need to add my voice to the mix. Maybe I didn't see the point in continuing to throw my verbal messages-in-a-bottle out into the ocean. In the end, though, I think the most compelling reason for my silence is this: I couldn't bear to spend one more moment of my life interacting with a computer screen.

As a teacher, my entire world shifted online. That daily heart-break left me spent and screen-depleted. I constantly craved interactions with nature and the 3D world. I desperately missed in-person meditation sits, walking the (now-defunct) labyrinth at Cerimon House, paddling with my dragon boat team, having coffee with friends, and, above all, sharing space with a classroom full of noisy kids and their magical energizing and exhausting presence.

Today, halfway through winter break of our return to in-person learning, I find myself emerging, blinking, wondering, reflecting. The first 4 months of this year were a tidal wave of personal and work challenges, combined with daily infusions of that blessed kid-energy. The world is still swimming in a global soup of apocalyptic catastrophe. And I'm still standing. Maybe it's time to re-engage.

"It is a peculiar sensation, this double-consciousness, this sense of always looking at one's self through the eyes of others, of measuring one's soul by the tape of a world that looks on in amused contempt and pity. "   -W.E.B. DuBois


I was reading an article in The New York Times today about a trend in the entertainment world called BlackOut Performances, in which stage productions or film screenings are reserved for an all-black audience. The article spoke about how, for performers and audience members, this experience offered a space where it was safe to react without the added layer of awareness of white observers of one's reaction. The article referenced the term "double-consciousness," coined by W.E.B. Dubois in his work THE SOULS OF BLACK FOLK (quoted above).

As a white teacher with students of color, this quote, this concept, resonated. I have noticed often that my  students who are African-American, or have some African-American background, frequently seem hyper-conscious of whether other kids are looking at them, talking about them, etc. They often ask to work in the hallway or in another private space, away from the eyes of the rest of the class. They often seem to have a heightened level of self-consciousness, which turns to defensive anger with a seeming rapidity that I and my white colleagues sometimes find mystifying and frustrating.

My white colleagues and I forget, because we can. We forget the exhausting waters these students swim in every moment of the school day, waters polluted by micro-agressions and steeped in hundreds of years of history that none of us can escape. The students swim with heightened awareness, with double-consciousness. When they seem to suddenly snap, it's only under a constant tension pulled taut that I fail to see, a cumulative effect that finally strains and  breaks. When they ask to work in the hallway, or they pull up the hood of their sweatshirt or pull down the brim of their baseball cap, I have to remember, they just need a break. They need a chance to let their guard down just a little bit, to breathe for a moment, to stop watching themselves with double-eyes.

If you, like me, are "teaching while white," take some time to notice this behavior in action. Try reframing it. See what happens.

DuBois' words were written over 100 years ago.

Posted by Cynthia J. McGean at 1:38 PM No comments:

A few weeks ago, I went to a candlelight vigil to protest ICE and the horrific conditions in the detention centers on the border in Texas. The vigil opened with a sacred dance from indigenous cultures, I believe from Mexico and South America. The people engaging in the dance ranged in age from very young children to older folks. Complex patterns of drumming drove the dance, complex patterns of movement wove around a circle and addressed the four directions. There was sage, I think, being burned. There were chants and vocalizations. This was a powerful act of sacred protest - no introduction, no explanation - fierce, strong, beautiful, claiming the space and declaring "We are here. This is our fight."

All around the circle of this plaza where this dance was happening, people had gathered with signs and candles and their hearts' desires to say "Enough," to present the opposition by people of faith to the horrors  happening under the guise of Law. This is the ultimate struggle at the heart of the New Testament - Love protesting the spiritual bankruptcies and hypocrisies of a world made subservient to Law.

The people gathered in the plaza were many races, but appeared majority white. We were bearing witness to this sacred indigenous dance that was enacted by people of color. And at each pause or climactic moment of the dance, the watchers would break into applause. Every time it happened, I felt a momentary disconnect, an abrupt shove outside the sacred, a rupture redefining the experience into one of performers and audience, with all the vast ripples of underlying meaning that can contain, especially when the dancers are indigenous and the audience is white and applause feels like an expression of approval.

At every burst of applause, I was conflicted. Was the applause an expression of appreciation? Yes. That was the intent. But somehow, it changed the experience. I found myself wishing we, the watchers, could simply bear witness without inserting ourselves, and our collection of values, into this sacred act that did not inherently belong to us.

I have met this internal struggle before on a smaller scale in church after someone sings. In that setting, the singer is up front and the watchers are ranged in rows before them - even more like a performance than the circular structure of the dance at the vigil. In a church, I am at least somewhat within my own culture realm, so the conflict is muted, but it's still there. Is this performance or sacred act or both? If it is both, what is the meaning of our applause?

Maybe it's my background in theater that confuses me. But theater itself was born from sacred rituals.  Could not the applause simply be a way for the watchers to participate in the sacred act? How did applause become so entangled with external validation and approval? Sometimes an audience throws money, too. Sometimes the performers are seeking money. Somewhere along the way, we humans, at least in Western culture, have conflated the sacred and the material, the communal act of prayerful creative expression and the individualistic act of ego, material gratification, or simple entertainment.

In the end, it seems to me that the intent of the artists - dancers, singers, performers - is paramount, as is the context of the act. If it is a sacred act, like the dance at the vigil, presented in a context of prayerful protest, like that was, with a distinct cultural link, then perhaps those of us watching should merely have borne witness. But when we didn't, I suppose our applause could simply be considered as our efforts to participate, to add our energy to the sacred act and give it power in the only way we knew how.

Or maybe our applause function, as in the epilogues of many Shakespeare's plays, as a means to free the performers from their sacred trance, to enable them to remain grounded in the physical realm as they reach to touch the divine - an act of anchoring, a kind of protection, a recognition that artistic expression takes the artist into another realm, and they require a lifeline to connect them to the physical realm if they are to return.
Posted by Cynthia J. McGean at 9:37 AM No comments: 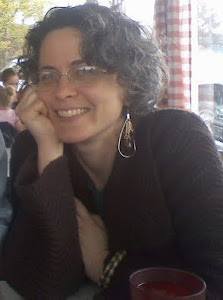